This week we decided to take a deeper look into what James Griffiths, Lead Programmer (AKA “Jimmy”) for BREAKAWAY mobile, has been up to. Specifically, we are looking into the Karma system. Jimmy enlightens us:

“The Karma System is a more behind the scenes system that keeps track of how a player is acting. If they are being a good person, standing up for others, helping them out, then they will gain Karma. If they are a bad person, putting others down, bullying them, they will lose karma. But other players will remember things too. If they don’t like what you’re doing, they may not want to practice with you in the clubhouse for example. Or, players will have different lines of dialogue, or new choices may open up based on what your Karma is.” 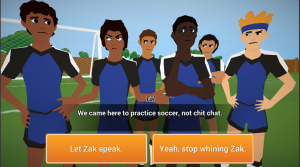 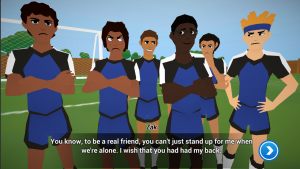 With the Karma system, your choices are remembered by each player, even between episodes!

Entire scenes can be affected by previous choices, which is important in making the player’s choices count! Jimmy’s role in the Karma system’s implementation has been crucial:

“My role has been basically rewriting the formula for the system. The player’s karma and standing with other characters is a hidden number, and the old formula didn’t work very well at all. So, I rewrote the formula, but also worked with making sure the system for characters remembering things that happened in the narrative, was working properly as well. “

Thanks to the support of our QA testers, we were able to determine the level of engagement that users had with the characters:

“A big complaint from focus group testing was that the characters in the narrative felt like robots just talking at you, so making characters dynamically respond to player choices will hopefully increase overall player engagement.”

As always, we would like to thank everyone who has supported BREAKAWAY mobile’s development! It is through both the testers and donors that we are able to produce such an amazing game!

If you are interested in participating in our closed beta testing, you can do so by completing this form: