As BREAKAWAY mobile moves closer to release, we wanted to give everyone a glimpse at what the team has been up to. Today, we take a deeper dive into the narrative. Dana Steinhoff, Creative Director, gives us insight to the changes that have been made over the Summer:

“We have completely overhauled the entire game script this Summer. The objective was to create a script with tighter dialogue, more dramatic moments for the player to experience first-hand, deeper characters that grew over the course of the story, and more interactable gameplay moments.”

Out with the old, in with the new! But the spirit of the game remains the same:

“We kept the original story structure, the characters, and a lot of the writing from the original Breakaway script and the script which was revised last Summer.”

One change that has had a positive impact on the game is the decision to expand the amount of choices the player can make. So how did the team come to this decision?

“We knew that the narrative needed a major re-haul when we began testing with our target demo at the Boys & Girls Club of Burlington. The kids would be reading through the narrative part of the story, and they have to tap to get to each new screen. As the space between the decision points grew, their tapping became faster and faster, until it was evident that a lot of them weren’t reading the story at all.”

At this point, Dana considered the game “broken.” Even though the game’s episodes were completed, and everything came together to the point that it was shippable, Dana realized that the narrative presented one last hurdle:

“I had hung our “North Star” above our product backlog wall a couple semesters prior. It was the purpose that we weighed every proposed feature against during development before deciding if we really needed it in the game. It reads: “Breakaway! is a game that provides a strong opportunity for meaningful change in the player through an engaging, Sabido-driven narrative, and fun, increasingly-challenging minigames and match gameplay.” If we shipped the game as it was, it would have been technically done, and kids probably would have had a fun time playing it. But we would have completely failed our North Star.” 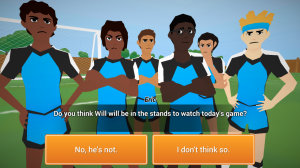 “Breakaway at the time,” In reference to the PC release,  “sometimes clocked in at over a dozen taps between choices.”

And the results of the narrative overhaul have been overwhelmingly positive:

QA testing remains a cornerstone of BREAKAWAY mobile’s success.  Seeing the game in the hands of new users is a crucial step in creating an experience that engages the player while ensuring that the “North Star” remains the priority.

We would like to thank those who have tested BREAKAWAY mobile and offered their feedback! If you are interested in participating in our closed beta testing, you can do so by completing this form: