BREAKAWAY mobile is nearing an open beta release and we are delighted to give everyone another deeper dive into the development of the game! This week William Giasson, Lead Artist for BREAKAWAY mobile, will tell us about the art tools he created in Unity to streamline the workflow. 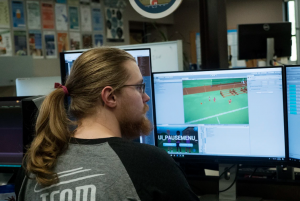 “My tasks generally include scene composition, actor posing and keeping visual continuity intact through the narrative. Because BREAKAWAY Mobile communicates the narrative similar to a movie (visually), it is important for an actor’s body language to match the dialogue and the setting, while also not being broken between all of the player paths that exist in the game.” 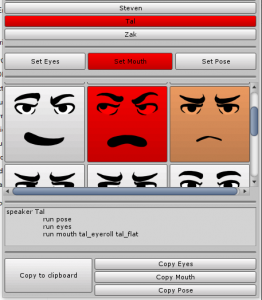 This tool makes it easy to set characters’ poses and faces from one convenient window!

To streamline his job, Will created art tools that allow him to quickly create poses and faces for each actor and assemble them quickly and efficiently. In addition to making his job easier, these tools allow Will to prototype scenes for the team to look at, getting feedback on a composition before a large time investment has been placed.

But that’s not the only tool Will has made:

“Another task that I took upon myself was to create a Unity editor window that could track game objects in a scene, let me add them to multiple lists, and give me a set of shortcuts or macros to cut out repetitive tasks. For positioning actors it made it easier to have an actor rotate to look at another and move them throughout the scene while managing up to twenty individual game objects just for one frame in the narrative. I ended up calling this tool the ‘Layout Object Selector.’ It just felt right.” 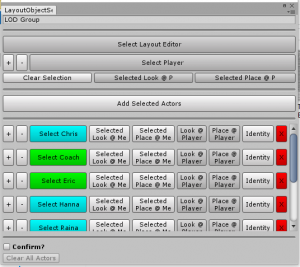 This tool allows to perform quick functions to the actor models.

With Will’s ingenuity, it is no wonder so much progress has been made this Summer!

We would like to thank those who have tested BREAKAWAY mobile and offered their feedback! If you are interested in participating in our closed beta testing, you can do so by completing this form: